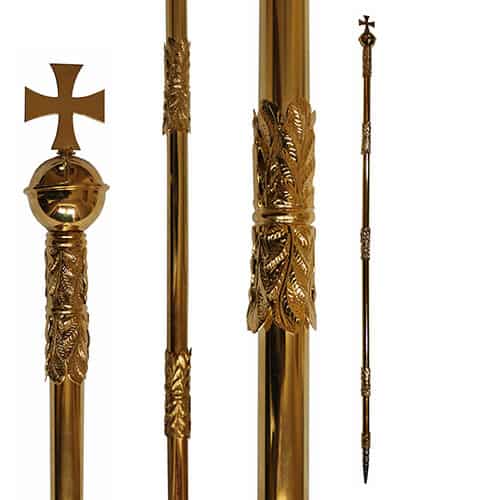 According to history St. Edward’s Staff is a plain, tapering gold rod made out of three sections. It is 1.4 meters long (4.6 ft) gold walking stick made for Charles II in 1661. It has a cross at the top and a spike at the bottom. It has also been known as the Long Sceptre.

St. Edward’s Staff is traditionally thought to have been a relic which was associated with Edward the Confessor (St. Edward) and has been carried in coronations of Richard III, Edward VI, Mary I, Elizabeth I and James I.

Like most of the other fated regalia, it did not survive the Commonwealth in 1660. After the dealth of Oliver Cromwell, and for the coronation of Charles II, who had been living in excile abroad, new jewels had to be made which were based on records of the lost items. It was decided to make the replicas as near as possible to the original medieval regalia which was used and also to use their original names. These replicas were made in 1660 and 1661 and included the St. Edwards Staff.