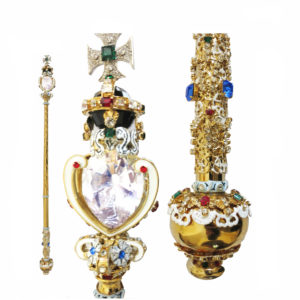 The Sceptre with the cross Replica 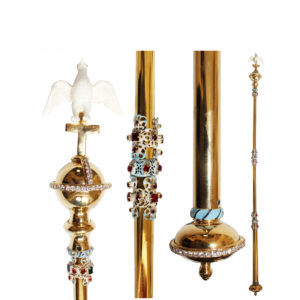 The Sceptre with the Dove 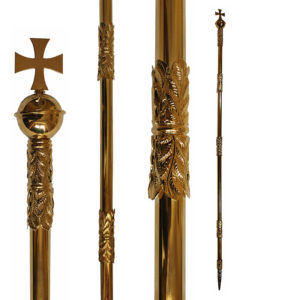 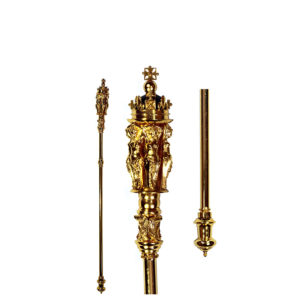 A sceptre is an ornamental rod that a king or queen carries on ceremonial occasions as a symbol of his or her power. It is a symbol of sovereignty, held by the ruling monarch as an item of royal or imperial insignia.

Some sceptres have small shrines on top which is represented on the royal seal.  The Sceptre of Scotland which is housed in Edinburgh Castle, has a shrine on the top with small images of St. Andrew, St. James the Great and the Virgin Mary.

The earliest English coronation which mentions a sceptre and staff is from the 9th century.  In the coronation of Ethelred II a sceptre and rod appear.  They also appear in the 12th century.  In an account of Richard I coronation, the royal sceptre of gold with the cross with a gold cross and the gold rod with the gold dove on top were entered as the first historical records of the time.

They survived until the Commonwealth and were described in an inventory of the regalia drawn up in 1649 when everything was destroyed. For the coronation of Charles II in 1661, new sceptres with the Cross and the Dove were made which are in use to this day.  Two more sceptres with a cross and a dove were added for the queen consort.